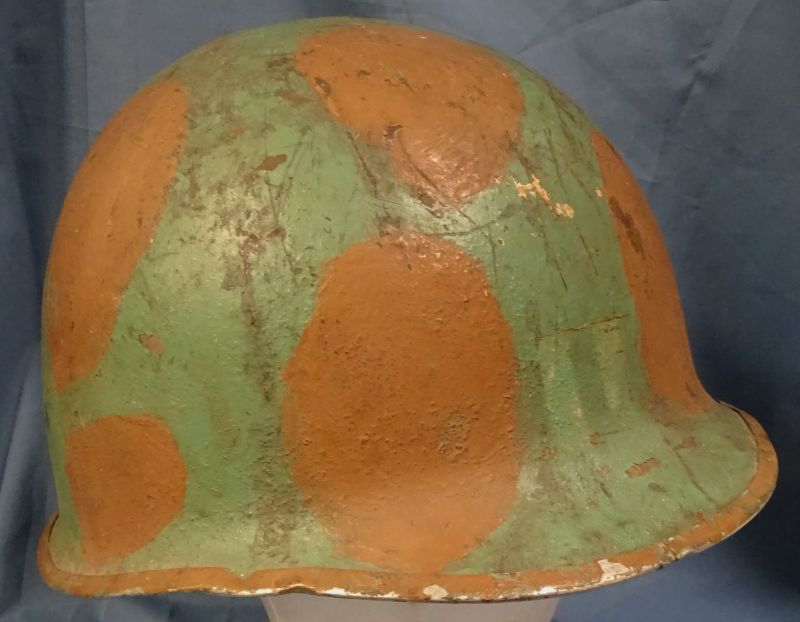 A front seam, fixed bale, M1 combat helmet that was given a painted camouflage scheme in the theater of operations. The original cork infused, olive green paint was covered over with a two color camouflage pattern of grass green and brown. On the front of the helmet can been seen a faint set of Army or Marine Corps Captain’s rank bars which were originally painted in white and which were then covered over by the camouflage paint. An examination of the helmet indicates that the individual who applied the camouflage carefully painted the magnesium rim of the helmet with the brown paint. These rims of the M1 helmets were notorious for their inability to hold on to the original olive green paint, so that even near mint examples of World War II M1 helmets are often found with gleaning rims where the paint quickly wore away. The individual who created this helmet addressed that situation by methodically applying the brown paint to the helmet rim. Additionally, it appears that the officer who originally wore this helmet may have decided that his helmet needed to be camouflaged after experiencing a “near miss”. There is a small, square shaped, crack in the helmet, about 1/4 of an inch square, located high on the left side. Three sides of this small “square” actually have openings to the helmet interior. This damage was likely caused by the grazing impact of a bullet or of a shrapnel fragment. When the interior of the helmet shell is examined it can be seen that there is a line of the light green camouflage paint running down into the helmet interior from that small spot of exterior damage to the shell. As such, the camouflage paint was obviously applied after that damage had occurred, indicating that the officer who wore the helmet apparently decided that it would be a good idea to give his helmet a camouflage paint pattern, and to cover over the officer’s rank insignia, after his helmet had been hit. The camouflage paint is approximately 85% intact on the exterior. The interior liner is an earlier Firestone model with the khaki colored web straps, including the fixed, non-adjustable, neck nape strap. Both the liner and the helmet shell are missing the chin straps.
Item Number: 25452 Category: Headgear