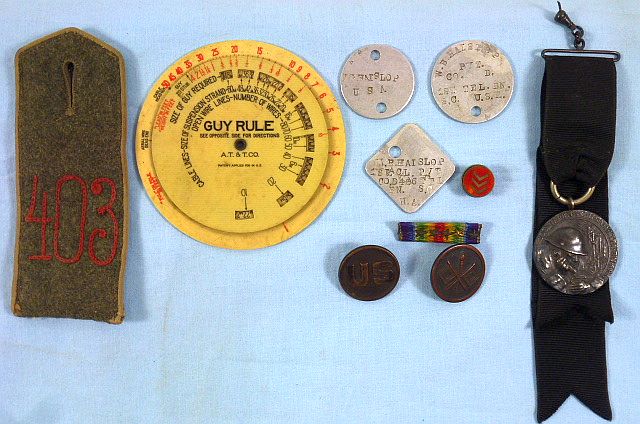 A group comprised of the named unit service medal, dog tags, and insignia of Private W.B. Haislop, who served in World War I as a member of the 406th Telegraph Battalion which, when it was sent to France, was re-designated as the 1st Telegraph Battalion, AEF. The group is comprised of the following items:
– The unit service medal of the 406th / 1st Telegraph Battalion, attached to a black silk ribbon watch fob. The medal is named to “W.B. Haislop”.
– 3 Dog tags, each named to W.B. Haislop, each with his service number of 200657, and two of which identify him as a member of Company D of the 1st Telegraph Battalion. The third tag carries no unit identification on it.
– A ribbon for the World War I Victory Medal with 5 campaign stars. It appears that the ribbon had a sixth star on it which has come off of it.
– A celluloid “Guy Rule” disc created by the A.T.&T. Company for use in stringing telegraph wires.
– An enamel lapel button with 3 overseas service stripes.
– A pair of enlisted collar disks – US and Signal Corps, lacking attachment nuts.
– A single German infantry shoulder strap of the 403rd Infantry Regiment, brought home by Haislop as a souvenir.