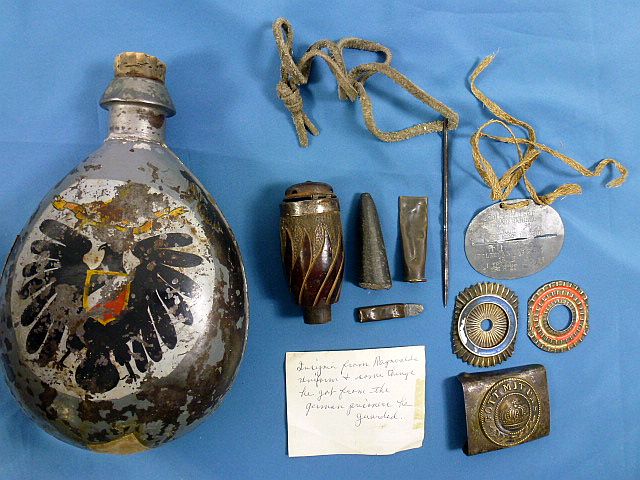 A group of items that is accompanied by a handwritten note: “Insignia from Ragnoualds uniform and some things he got from the German prisoner he guarded”. The group consists of the following items:
– WWI German canteen with a painted Imperial German eagle on one side. The paint is approximately 70% intact. One side of the canteen has old tape on it for an unknown reason.
– A carved wooden pipe bowl.
– The damaged nose of a large caliber bullet.
– A flattened brass shell casing.
– A flattened bullet, both casing and nose.
– A long spike, about 4 1/2 inches long, on a leather strap, and which looks like a large “pick” for cleaning a weapon touch hole of bore.
– A pair of pickelhaube cockades. One is Bavarian, the other had bright red paint applied to it at some point. both cockades were trimmed on the sides to give them straight edges on the sides.
– A brass “Gott Mit Uns” belt buckle, the item that was perhaps the most sought after souvenir among American troops.
– A German dog tag for Fritz Moser of Infantry Regiment 73.