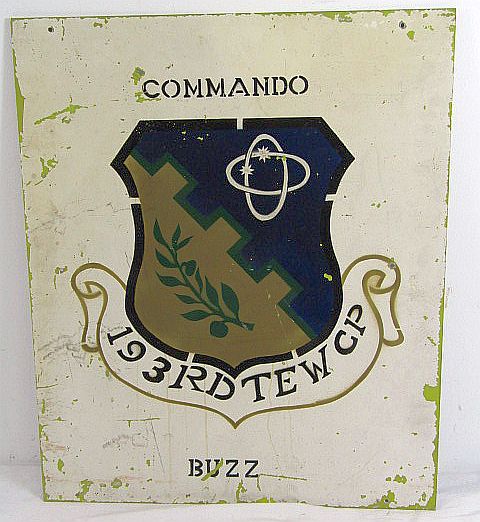 The large, painted squadron sign for the Command Post of the 193rd Tactical Electronic Warfare Squadron during Operation “Commando Buzz” during the Vietnam War when the squadron was conducting operations out of Thailand. The signs shows expected signs of age and wear, and it is approximately 20 by 24 inches in size. The sign has four small holes, one at each corner, for mounting of the sign. The unit was a part of the Pennsylvania Air National Guard that was deployed to Thailand during the Vietnam War to conduct electronic warfare operations. The website of the Pennsylvania Air National guard provides the following information about the unit and the operation:
“On July 28, 1970, two EC-121 Lockheed “Super Constellations” from the 193d Tactical Electronic Warfare Squadron took off from Olmsted State Airport, Harrisburg, Pennsylvania. United States forces were fighting in Vietnam, and the EC-121s were headed for Korat in the neighboring country of Thailand, 12,000 miles away, where the United States Air Force was operating from a Royal Thai Air Force base. Korat Air Base would be home for 252 Air Guardsmen for the next six months. The men were rotated as part of Operation Commando Buzz, with approximately 60 officers and airmen at a time serving tours of duty of from 30 to 90 days. In addition to the aircrews and technicians, an additional 75 officers and airmen supported Commando Buzz by flying materiel and personnel from Olmsted to Southeast Asia and back. The Pennsylvania Air Guard’s EC-121s were laden with electronic equipment, and their mission was to act as flying radar stations and airborne control platforms. They possessed search and identification radar, interception equipment, and a battery of communications gear. The range of the EC-121s extended over all of North Vietnam and the Gulf of Tonkin, and they were a key element in Seventh Air Force control of tactical air operations. The final group of Air Guardsmen rotated during the Thanksgiving and Christmas holidays of 1970, and early in January 1971, the mission was completed. Within three days after the return of the 193d to Pennsylvania the Commander-in-Chief, Pacific Air Forces sent a message to the Chairman of the Joint Chiefs of Staff, commending the dedication and professionalism demonstrated by the exceptional mission performance of the 193d, which won the USAF outstanding unit award that year. The 193d Tactical Electronic Warfare Squadron is today the 193d Special Operations Group, still a proud part of the Pennsylvania Air National Guard.”
Item Number: 30566 Categories: Militaria of Other Countries, Miscellaneous, Vietnam War Era