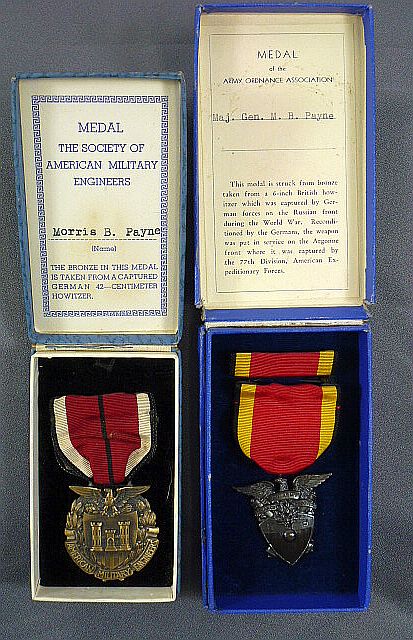 Pair of Society Medals to an Army Major General

A pair of boxed military society medals that were awarded to Major General Morris B. Payne, who served in World War I and who rose to command the 43rd Infantry Division on the eve of the Second World War. Payne was a noted architect in civilian life, and these two medals reflect his membership in the Society of American Military Engineers and the Army Ordnance Association. Both of the medals are split brooch. The Engineers medal was struck by L.G. Balfour and is named to Payne on the reverse. The Ordnance medal is marked “BB&B” for production by Bailey, Banks & Biddle. Each of the medals is contained within their original boxes, and the interior lid of each has a presentation certificate with the name of Payne typed on it. Both medals are in excellent condition.