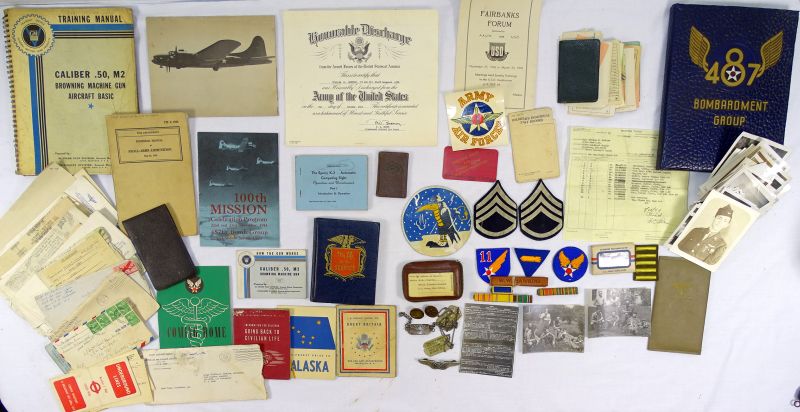 A large group comprised of the insignia, documents, and photographs of Army Air Force Staff Sergeant William W. Hawkins, who served as a combat armorer and air gunner on a B-17 Flying Fortress, with service in both the Pacific and European Theaters of Operations.

The insignia consists of Hawkins’s two dog tags; his sterling silver identification bracelet, with small air crew wings mounted on the bracelet below which is engraved “Bill Hawkins”; full size, 3 inch air crew wings, with clutch back fasteners; two ribbon bars, both 1/2 inch wide, with a three place ribbon bar bearing plastic covered ribbons for the Pacific Campaign Medal, the European Campaign Medal, and the American Defense Medal (this bar being clutch back), while the two place ribbon bar is pin back and displays the ribbons for the American Campaign Medal and the World War II Victory Medal. A Presidential Unit Citation ribbon is also present. The insignia also includes a pair of machine woven Staff Sergeant chevrons; and an Army Air Force shoulder patch, an 11th Air Force shoulder patch, and an Army Air Force specialist triangle for an aviation armorer, embroidered on wool. The group further includes three leather name tags for the flight jacket, these bearing the name “W.W. Hawkins”. Finally, the insignia includes a large, painted leather flight jacket patch, approximately 4 3/4 inches in diameter, for the 344th Fighter Squadron.

Documents in the group include a small “Army Separation Record” which identifies Hawkins as having “Served as flight chief of heavy bombers. Supported and performed maintenance on guns, bomb racks, and gun sights. Loaded bombs on ships” and that he “Flew as armorer-gunner on B-17. In charge of maintenance of guns and bomb racks while in flight. Served as tail gunner”. A “Special Pass for Combat Crew Enlisted Personnel” from an Army Air force base in Tennessee; and Hawkins’s large Honorable Discharge document, dated October, 1947. The group includes soldiers’ guides to Alaska and Great Britain; a 1943 guide to the London Underground; and several pieces of wartime correspondence sent to Hawkins.

The group also includes a program for a celebration of the 100th mission of the 487th Bomb Group in 1944. In the back of this program is mounted a photograph of the combat crew and ground crew of the B-17 bomber “Miss Bea Havin”, this presumably being Hawkins’s bomber in the 8th Air force. There is also a hard cover history of the 487th Bomb Group which includes Hawkins’ name on the roster of personnel of the group that is included within the book. There is also a large training manual for the .50 caliber Browning Machine Gun, as used in the American bombers. The group contains a small, hardcover book titled “My Life in the Service”,  in which Hawkins recorded his name and details of his service. He noted the name and address of a friend and wrote of their plans to start their own air transport company after the war…”that is, if we both come back.” Hawkins recorded (without details) that he was made a Sergeant on May 1st of 1943, but on November 1, 1943, he was “busted to rank of Private without prejudice” (from which he obviously rose again to the rank of Staff Sergeant). The book contains entries by Hawkins about his life in the service from November 11, 1942, until June 17, 1943. Within the section titled “Places I have Been”, Hawkins records his various duty stations, the last entry being that of the 487th Bomb Group at Camp Kilmer, New Jersey. Hawkins most likely stopped recording entries at that point because he was about to go overseas and security regulations would have impacted his ability to keep a diary. Also within the group are more than 75 photographs, one of which is a nice portrait photo of Hawkins in uniform. The other photographs include a few of aircraft, several of a USO show, and many pictures of friends and comrades in the service, as well as the required photographs of some pretty girls.

All of the materials show expected signs of age but overall the group is an interesting and extensive record of the service of  a B-17 gunner of “The Mighty Eighth”.