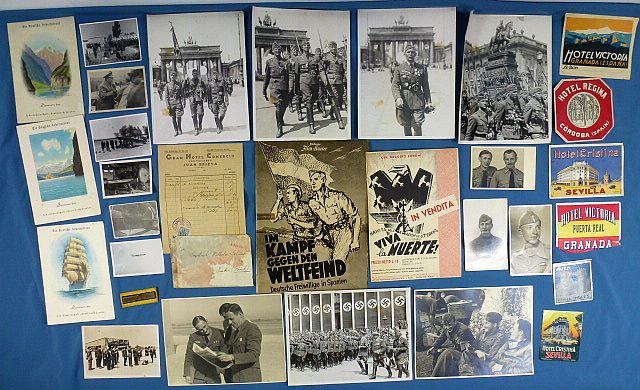 A large grouping of various photographs and documents which all were apparently accumulated by a member of the Condor Legion during his service in Spain and on the trip back to Germany. The group is comprised of the following items:
– Three postcard size (3 1/4 by 5 1/4 inches) portrait photographs. Two of these show individual members of the Condor Legion while the third shows a pair of Condor Legion members with a penciled notation on the reverse. The Photographs show several members of the Condor Legion wearing the bullion tape rank stripes on their breast, one such stripe being included in this group.
– 7 photograph ranging in size from 2 1/2 by 4 inches to 4 by 5 3/4 inches. These show Condor Legion members and aircraft. One appears to show the funeral of a Condor Legion member in Spain. Most all of the photographs appear to be private images as opposed to commercially produced photographs.
– Five large official German press photographs, about 7 by 9 1/2 inches, which show the parade of returning Condor Legion veterans in Berlin in June of 1939. Each of the photographs has an official typed caption pasted to the reverse.
– Two large photographs, about 7 by 9 inches, showing Condor Legion pilots.
– An 8 page photo magazine with images from a period German film about the Condor Legion in Spain.
– Three menus and activity schedules from May of 1939 from a “strength Through Joy” cruise ship of the German Labor Front. The interior cover of each carries the statement “Return of the Legion Condor from Spain aboard the steamer ‘Sierra Cordoba’ in May 1939”.
– A handwritten letter in an envelope dated 5 April 1938 which also contains a long typed and signed sheet, apparently a list of clothing being sent back to Germany.
– A receipt from a Spanish hotel.
– A small leaflet in Italian, apparently about a film dealing with the Italian troops in Spain.
– 6 color luggage labels from Spanish hotels.
– A gold lace rank stripe as worn by members of the Condor Legion.

All of the items show typical characteristics of use and age but overall the group is in very good condition.