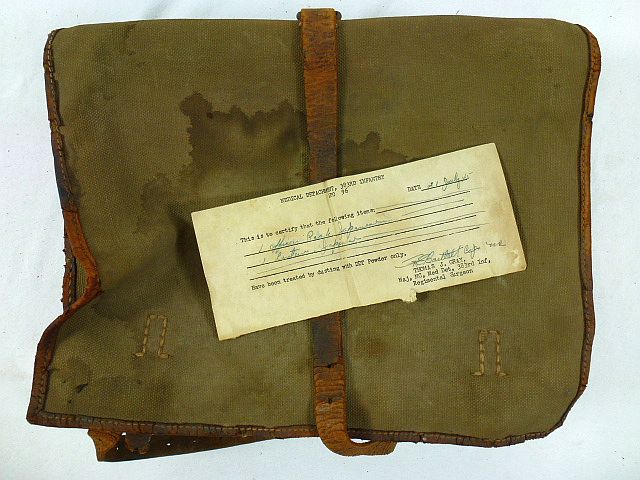 This wooden frame Japanese Army backpack is accompanied by a “Capture Paper” dated July 21 of 1945. The document is signed by a doctor with the medical detachment of the 383rd Infantry Regiment and attests to the fact that “1 officers pack, Japanese” and “1 lantern, Japanese” had been treated by dusting with DDT powder, presumably to kill any insects inside of the items before the G.I. who captured the items sent them back to the United States. The 383rd Infantry Regiment was a part of the 96th Infantry Division which, between April and June of 1945, had been heavily engaged in the conquest of the Japanese home island of Okinawa, an effort that led to four of the soldiers of the Division receiving the Medal of Honor. This pack was certainly captured by a member of the Division on Okinawa not long after the end of the battle. The backpack has an interior issue stamp dated 1935. The pack is a khaki colored canvas backpack with a wooden internal frame. Two internal flaps with ties secure the contents. The back of the pack is covered with fur, now well worn. Two of the leather straps that secure the flap down are broken and reverse straps are missing. Leather edging shows wear. Approximately 12 inches by 10 inches by 4 inches in size.