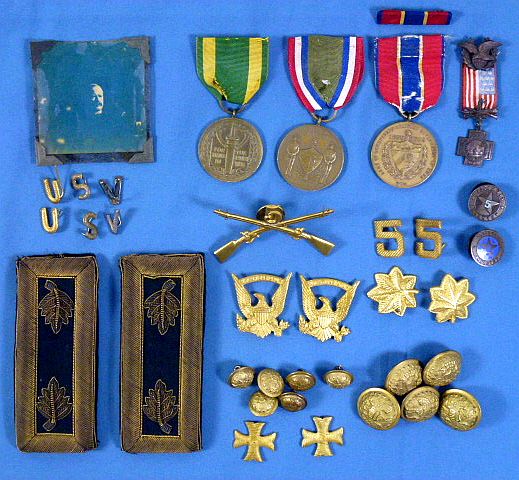 The medals and insignia of Major Milton R. Keeley, a physician who served in the Spanish American War period as an army surgeon with the 5th Illinois Infantry. The group consists of the following items:

– Army Cuban Pacification Medal, unnumbered, with original worn ribbon but lacking any suspension brooch. There is also a ribbon bar for this medal with two attachment loops on the reverse.

– A miniature medal for the Spanish American War Veterans.

There is also a small photograph, about 2 1/8 inches square, sealed under plastic with photo corners attached. On the back is written “M.R. Keeley”. There are small pieces of Velcro on the back of the photograph.

The medals and insignia were apparently displayed in a frame at some point, with the pins and suspension brooches having been removed from the medals and with evidence of remnants of adhesive residue on the backs of the medal ribbons and some of the insignia.